And just because they’re under $200 that doesn’t mean they aren’t worth it! This list of telescopes shows that you can get a quality buy for all levels of users for a fraction of the cost.

Many of the scopes on the list fall way below that price point and will really fit the bill if you want to look at the stars, planets and Moon. Here are some of the best and why they would be a great fit on your wish list. 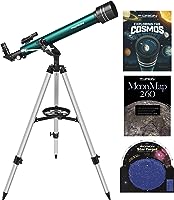 There’s no better way to get value for your money than with a full size kit rather than just a telescope. That is what Orion decided to do with this low priced product that comes with everything but the kitchen sink.

It works well as a complete set whether it is for beginners or intermediates, and is a great gift for kids that want to get started out with astronomy. Using a 60mm telescope the Observer can view the most known planets and starts in the galaxy without a problem.

Two fully coated 1.25 eyepieces allows you to get a crisp image every time, even on the busiest of nights. With such a large enhancement in the magnification options buyers will have more to look at in the sky than ever before. Bundled educational materials include the Orion MoonMap 260, Star target planisphere chart, and the Astronomy Book.

This is about all the material that any beginning astronomer will need, and they’ll be busy for weeks with all of the included content and pictures. A great start to the list, the Observer is definitely one of the better choices on the list. 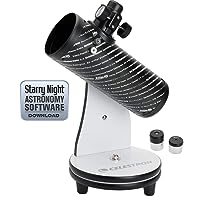 Celestron offers a low cost option for buyers that just want extreme portability with their product, and introduces the Celestron 21024 FirstScope Telescope.

The Firstcope series is known for being miniature powerhouses when it comes to astronomy, and with few options to fiddle with are perfect for the beginning user. But the attraction that drives sales to this series is the price and the level of durability, all due to its size.

The powerful 76mm aperture reflector optical tube is even stronger than the Observer’s, and will gain you a considerable advantage when looking out in the night sky.

This is all done while being about ¼ the size of the original product and weighing a lot less. When moving the tube around on the base it is loose enough to where you don’t have to worry about adding too much pressure. But it is also sturdy enough to stay in place, even if you accidentally hit the top of it.

With the two included eyepieces that is about the most customization you will get out of this little telescope, but it will be all you need. Buyers that want to keep things small when it comes to astronomy end up pretty happy with this as a purchasing decision. 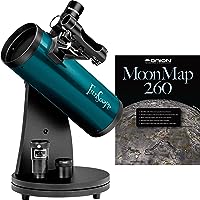 Returning to the list with a low priced product is Orion, with a design and style that rivals the FirstScope. If you want to get something that will be a great traveling telescope to a first time user, then buying this product will be a real treat.

Even with its small portable size, it has a powerful 76mm optic that is built to collect 60% more natural light that the smaller 60mm telescopes.

This is the same size as the FirstScope, but with a better light gathering algorithm. Using this handy little item you can view the finest details of the moon and even see the biggest stars in the solar system. With the included educational materials buyers can find the most popular craters and lunar features on the Moon.

The scope in its entirety is only 4 pounds, so expect to be able to use it anywhere you want. Dimensions come out to 8x8x13.5 inches total. Don’t pass this product up if you want great power for a small amount of money. 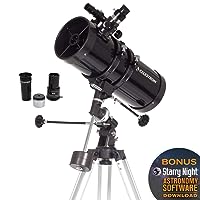 The most expensive item so far but still at the medium price range is the Celestron 127EQ PowerSeeker Telescope that comes in a range of styles.

The 3x Barlow lens is a great way to boost the power and comes bundled with the set for free. If the regular focus isn’t enough then you can count on an incredible magnification setup with use of the Barlow lens.

The highest aperture on the list up to this point goes to the PowerSeeker, which lives up to its name with a 127mm aperture to play around with.

Focal length maxes out at 1000mm, and combining that with the Barlow lens makes this the most powerful telescope on the list up to this point. An accessory tray is included along with an aluminum tripod to keep things in order while you stargaze.

Last but not least the German Equatorial Mount works like a dream and is a major selling point with this model. One of the best on the list and probably close to the top, this telescope is all the power you will ever need. 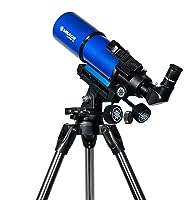 This beautiful blue telescope comes in a variety of styles, much like the last item on the list. It is a high priced model but still below the $200 price range that is required to make this list. Aperture is pretty good with this model at 80mm with a focal length of 400mm.

So you’ll get good range on faraway planets and stars, but the real eye candy that is within this scopes power is going to be when it is pointed towards the Moon. Using the low, medium and high magnification eyepieces offers a completely different experience when discovering new things in the galaxy.

This doesn’t include the power 2x Barlow lens that doubles the power of each eyepiece. If you tend to have a lot of materials with you while stargazing, then the accessory tray will come in handy.

And for those interested in learning more about the stars, an instructional DVD and Astronomical software is included. As another scope that offers a ton of options, the Infinity is a great choice at a low price.

Getting close to the end of the list there are some interesting mid-priced scopes that have come out. The Orion 11043 SpaceProbe 3 Altazimuth Reflector Telescope works well as a beginner and intermediate telescope for buyers that want something to last for years.

Despite its size it is lightweight and can be set up in a matter of minutes, tripod and all. The powerful 76mm aperture can see storms on other planets, rings on the outside of planets and even the various moons orbiting Jupiter.

No matter what direction you move the scope while on the tripod you’ll get a smooth and consistent feeling, never losing track of what you’re following in the sky. The EZ Finder II reflex sight is the perfect way to get the most out of your night out, with the ability to find many objects with the scope that would be harder to find with lesser scopes.

Included in the package are two 1.25 inch telescope eyepieces, reflector collimation cap and the Starry Night astronomy software. A deal and then some, this is one telescope that will take more than a week to go through all of the features. 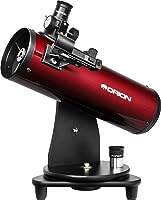 Second to last on the list is the medium priced Orion 10012 SkyScanner 100mm TableTop Reflector Telescope. If you’re looking for a reliable tabletop reflector telescope that will last you for years, then this little portable item will do just the trick.

Featuring a powerful 100mm parabolic primary mirror optic this is small but extremely powerful when viewing the stars. Avoiding going the cheap route and using plastic lens, this fully glass lens product will grant you a sharpness that is unavailable on lower tier devices.

Combine that with the power of the two 1.25 telescope eyepieces that come in both 20mm and 10mm flavors and you have a very nice setup. Accessories bundled are the infamous Starry Night astronomy software and an EZ Finder II aiming device.

It doesn’t take long to get used to all of the features offered, and with the powerful long view but wide angle of the optics you’ll get to see more of the sky than with any other similarly styled telescope. One of the best on the list, this is one telescope that will do more than just sit on your office desk. 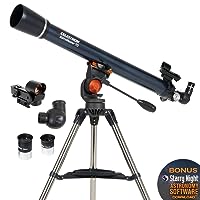 Saving one of the best for last, the medium priced Celestron 21061 AstroMaster 70AZ Refractor Telescope comes in styles of 70AZ Refractor and 90AZ Refractor. Both offer quite a punch in the power department and come bundled with durable and high quality materials.

Setting this up when it first arrives in the box takes minutes, and no tools are required for the entire set up or even the breakdown of the equipment. A StarPointer is permanently mounted to the scope, so you’ll always have a way to center things when needed.

For terrestrial and astronomical use you can erect image optics on the fly, and take full advantage of the quick release dovetail attachment.

There isn’t anything else like that on the list, so it can be considered a premium feature. The diameter of the optical lens is a nice 2.6 inches, more than enough for long and wide viewing of the galaxy.

With a nice hefty weight of 18 pounds and dimensions of 15×5.1×3.9, this will be the center of attention at stargazing parties that you organize. As the last product on the list, it would be perfect okay to call this the best on the list.

That concludes what has been an interesting list showing that breaking the bank is not always necessary when getting a fantastic telescope. With some key differences explained and a lot of pros listed, you’ll be able to come to a sound buying decision when it counts.